One of the buzzwords gaining leverage these days is “tolerance.” But we need to look at tolerance vs. inclusion. Especially in educational settings.

There’s a call for schools and other institutions to be more open and tolerant. Particularly to people of other ethnicities or with a sexual orientation that strays from the “norm.” And it’s coming from a well-meaning place, to be sure. But ultimately, it misses the point.

Institutions such as arts academy high schools that are, by default, not dictated by conventional thought have long understood the idea of tolerance vs. inclusion. And it’s the latter that fosters growth and allows for ALL students to thrive.

Unfortunately, humans are wired to compartmentalize. And we’re quick to do this with other humans. In other words, we like to neatly place people in boxes and label them before we’ve taken any time to discover what makes each person special.

That’s why it’s essential that students are exposed to other world cultures through the arts, music, writing, dance, etc. throughout their entire education. This allows them to move into space with other students with an open heart and mind.

Meanwhile, the tendency to pre-label and prejudge based on differences excludes certain segments of the student body from advancing and moving forward. They end up isolated or, at the very best, tolerated.

And this is where the distinction between being tolerated as opposed to included makes all the difference.

The Definition of Tolerance

Within the definition of the word tolerance is the act of enduring or suffering something with which one does not necessarily agree. And yes, it’s certainly better than defying or demonizing something or someone different because you deem them “wrong”.

As we said previously, the good intention behind tolerance is understood. But at the end of the day, there’s an unspoken aspect of tolerance that involves the act of “allowing something”.

In the battle of tolerance vs. inclusion, it’s inclusion we’re after. 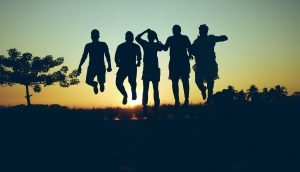 Where tolerance is endurance or acceptance based on another’s terms, inclusion is welcoming and embracing of all. There’s a sense of higher and lower that comes with tolerance that’s lacking with inclusion.

Inclusion, by definition, is to “include, comprehend, comprise, and embrace.” It does not imply that there is a special time or place where one can express what makes them distinct and different. It is the understanding that everything unique and unusual is unconditionally welcomed.

We KNOW. It’s not easy. We also understand though that learning environments thrive on diversity and inclusiveness. Openness is essential.

And this is where schools with a focus on the arts have a distinct advantage.

Art embraces what makes an individual unique and encourages further exploration. It comprises and embraces the student and recognizes him or her as a part of the whole.

When schools don’t openly and actively support an inclusive student body and curriculum, divisiveness creeps in and students take it as a cue on the school’s culture.

There are, of course, challenges that come with the geographical location of a school. In public schools that don’t permit students from other districts, there can be an overwhelming number of students of essentially the same race and socio-economic standing. Unfortunately, some parents seek this in the schools they choose for their kids.

On the other hand, many parents are recognizing the benefits of their kids learning inclusion. This is especially true for parents who witness their kids repeatedly struggling with and/or getting bullied for being exactly who they are. When these same kids enter a school where they feel safe and embraced, it can be life-changing.

Times They Are a-Changin’

The good news is, each successive generation’s ideas about tolerance vs. inclusion seem to be more expansive. Fueled by this more inclusive culture, Millennials are stepping up and making themselves heard on this issue.

We can only anticipate that diversity and inclusion will encompass even greater meaning and with deeper engagement when Generation Z takes the helm. And we strive to be key players.

So if you’re looking for a middle or high school that will fully embrace your child’s unique idiosyncrasies and teaches inclusion by way of demonstration, contact us today to take a tour of our amazing facility.

And experience what it means to watch your child thrive.