Home // Art Integrated Education // Do You Have Synesthesia?

Do You Have Synesthesia?

Walk down the hall of any arts academy high school and you’re bound to run into more than a handful of students who have synesthesia. And it’s not something you can avoid with a mask.

The term synesthesia might sound scary. It’s not though. In fact, if you’re a synesthete (one who has synesthesia), the word might sound purple. Or smooth.

That’s because synesthesia is when one sensory experience involuntarily prompts another. Thus, a synesthete may see a sound, taste a shape, or smell a color. In fact, there are at least 73 different types of synesthesia.

And those who excel in creativity most often experience it.

No one can say for sure. Some scientists think it’s the result of crossed wires in the brain and that the neurons and synapses that are typically contained within one sensory system cross to another. This can cause a synesthete so see Tuesday as orange or experience numbers as sounds.

An estimated four percent of the population is synesthetic – and the vast majority of them are artists – be they writers, visual artists, actors, musicians, etc. It’s not a neurological problem though. Rather, it’s a neurological phenomenon that artists deem as a tremendously valuable tool.

Synesthesia Is Not a Hoax

Up until 1980, many were skeptical of synesthesia. But today, thanks to neuroimaging and the ability to connect somebody’s sense of the reality of the world to their brain’s architecture, an artist no longer has to merely claim that Thursday is magenta. Researchers can actually look at the activity in the cortical areas of a synesthete’s brain when he or she sees the word and compare it to a non-synesthete’s brain scan.

One of today’s most well-known synesthetes is Pharrell Williams. As he says, “people with synesthesia, we don’t really notice until someone brings it up, and then someone else says, ‘Well, no, I don’t see colors when I hear music.’ And that’s when you realize

For Williams, he relies on his synesthesia when making music. He is able to determine when something is in key based on it matching the color he sees in his mind. Sound weird? If you said no, then you might have synesthesia. And you’re in good company.

Below are seven other creative souls who have or had synesthesia:

For musician Amos, sounds produce different images of lights. She explained it in her book Piece by Piece like this, “The song appears as light filament once I’ve cracked it … I’ve never seen a duplicated song structure. I’ve never seen the same light creature in my life. Obviously similar chord progressions follow similar light patterns, but try to imagine the best kaleidoscope ever.”

A fellow musician, Joel sees soft and slow rhythms in terms of blue and green. A more vivid color like orange, red, or gold is most often associated with a strong melodic and rhythmic pattern. Joel’s synesthesia extends to his lyrics as well (a.k.a. grapheme-color synesthesia). Certain lyrics he writes have to follow a “vowel color.” Words with strong vowel endings are a vivid blue or green. As for the consonants? He sees hard sounds such as t, p, or s as more red in hue.

Of course, as we mentioned above, synesthesia extends across all the arts. This includes creative writers. For Baudelaire, there was a distinct connection between sensation and emotion. He subscribed to the popular theory at the time that every element of existence corresponds to another in a spiritual sense of interconnectedness. Yeah, that’s a bit heady. But maybe his following writing illustrates his synesthesia a little more clearly: “Perfumes and sounds and colors correspond. / Some scents are cool as children’s flesh is cool, / Sweet as are oboes, green as meadowlands”.

Like Billy Joel, poet Rimbaud was also a grapheme-color synesthete – long before anyone knew what that was. It’s absolutely apparent in his poem entitled Vowels:

Black A, white E, red I, green U, blue O—vowels,
Some day I will open your silent pregnancies:
A, black belt, hairy with bursting flies,
Bumbling and buzzing over stinking cruelties.

Based on that, it’s pretty hard to argue that Rimbaud was a high-level (some might even say black belt) synesthete. 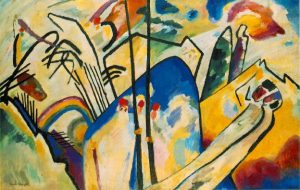 Moving into the world of visual art, so many of the abstract works by Russian artist Wassily Kandinsky show a distinct intertwining of music and color. For him, they could not be separated. Kandinsky was also a talented cellist and he associated each musical note with an exact hue. As he once said, “Color is the keyboard. The eye is the hammer. The soul is the piano with its many strings. The artist is the hand that purposely sets the soul vibrating by means of this or that key.”

Many art historians believe that van Gogh was a synesthete. In a letter to his brother Theo, van Gogh revealed, “Some artists have a nervous hand at drawing, which gives their technique something of the sound peculiar to a violin.” In van Gogh’s case though, his synesthesia may have cost him the chance to be a pianist. When his piano teacher realized he was associating notes with colors, he took it as a sign of insanity and sent him packing.

If you haven’t yet heard of Northern Irish artist Jack Coulter, that may be because he’s just 26 years old. But he’s also a hardcore synesthete who can see sounds and uses them to inform his abstract expressionist paintings. At just 23, he was involved in producing a “musical painting” for the Glastonbury Festival after listening to every artist who performed at the festival in chronological order. Since that time, he has gained a lot of traction and attention in the contemporary art world. As Coulter explains, “When I listen to a piece of music, the bleeds of my visual-auditory senses are in need of freedom, I feel the instant urge to birth a painting that represents what I am intrinsically and extrinsically experiencing.”

Does Any of This Sound Familiar?

Do you suspect that you or your child have synesthesia? Perhaps it’s both of you – given that it seems to be hereditary as well.

It’s possible that if you have a synesthetic child, he or she may feel different or misunderstood. Especially at school. If so, consider the benefits of sending your child to an arts academy middle and high school where he or she will feel at home with others who see Saturdays as green or triangles as noisy.

Contact us today to find out how to enroll your child at Arts Academy in the Woods. And prepare for possibility.