Home // Art Integrated Education // Are Art and Athletics So Different?

Are Art and Athletics So Different?

Art and athletics are often seen as positioned at opposite ends of the spectrum.

It’s as if they are mutually exclusive – that one cannot be an artist and an athlete at the same time. But when you get right down to it, are athletes and artists really all that different?

They may not be. In fact, there is more than a handful of professional athletes who have shown to be impressive artists as well.

Art and Athletics on the Same Team

While film and television are quick to portray an arts academy high school as completely bereft of athletics, that’s definitely not the case with Arts Academy in the Woods in Frasier.

Just this year, there was more than enough interest among students to assemble an actual competitive basketball team – and the AAW Wildcats were born.

It’s been an amazing addition to an already wildly diverse school. And the students are able to easily bridge the two worlds of art and athletics… just as quite a few professional athletes have done.

Robert McClain grew up in a military family and was certain his future was with the Marines. He was a star special teamer and defensive back with the Connecticut Huskies but wasn’t sure he’d make the cut for the NFL.

He did though. The Carolina Panthers grabbed him in the second round of the 2010 NFL Draft, where he’d go on to play for the Panthers, as well as for the Falcons, Chargers, and Buccaneers.

Even so, McClain has continued to focus on his art as well. 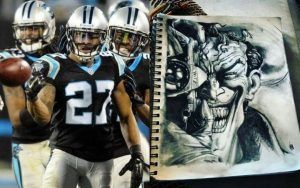 Off the field, McClain has an eclectic style that spans from abstract expressionism to pop art to graphite drawing. It seems that no matter what art form he takes on, he finds some level of mastery.

He’s even learning how to tattoo!

If you haven’t heard of him, Bernie Williams played for the New York Yankees for the entirety of his 16-year MLB career. He had a stellar career in baseball – earning five All-Star selections and bringing home an unbelievable four World Series Championships.

Baseball is clearly in his blood. But so too is music.

What most people may not know while watching Williams out in center field is that he is also a classically-trained guitarist.

Born in Puerto Rico, Williams studies and practices a wide array of styles and borrows from every genre from classical to jazz. He pays homage to his Latin roots and has released two jazz albums that are heavily influenced the Latin sound.

You may be thinking that this is a classic case of breaking into the business because he has a famous face and a notable name. The 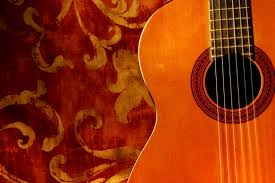 reality is, Williams signed with Paul McCartney’s music publishing company BEFORE the release of his first album.

His talent was not in question. And by his second album, he was doing collaborations with big names like Bruce Springsteen. That second album later went to get the nomination for a Latin Grammy in 2009.

Both albums also found No. 2 and No. 3 spots on the U.S. Jazz charts. So it’s clear that art and athletics are not mutually exclusive. And the above are just two examples of athletes who are also artists.

But what about the other way around? Are there artists who are also athletes?

The answer, of course, is yes.

Hillary Werth is an artist but has no problem drawing the connection between athletics and arts. This may be due in part to the fact that both of her parents were professional athletes and artists as well. So she grew up in a household where both were equally embraced rather diametrically opposed.

Yet, being an artist with an athletic drive did make her something of an anomaly. She was often questioned by her peers as to which one she was most loyal – art or athletics? For a while, this was confusing to her. 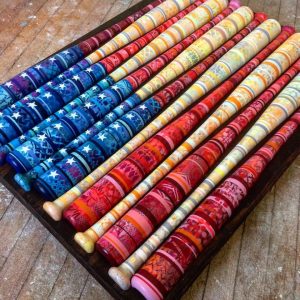 Initially, she felt the need to prove herself in each area because others didn’t understand her passion for both. Then she realized that she didn’t have to prove anything to anyone. It was at that point that she found success with both her art and in athletics. She was able to show her peers that choosing both was okay.

“In fact, I’d argue that being an athlete makes for a more enriched, well-rounded art experience,” she says.

Obvious Similarities Between Art and Athletics

For those who embrace both art and athletics as a way of life, there are many common parallels. There is a pursuit for excellence and a willingness for mastery. Making art and engaging in athletics both require drive and hard work.

They also both require the practice – and the discipline to do so. After all, a painter won’t improve their skills if they aren’t continually in the process of picking up a brush and setting it to the canvas. The same can be said for a kicker who hopes to score a field goal every time. It all takes practice.

“The passion that it takes to be an athlete or an artist are one and the same,” says Hillary. “I can find similarities from one of my athletic performances to a painting I did from start to finish.”

Art School Does Not Mean ‘No Sports’ School

At Arts Academy in the Woods, there’s no rule that says our students must choose between art and athletics.

Just as we see the value of teaching math through art or science through music, we recognize the importance of athletics (for some) as part of a well-rounded arts education.

So if you’re interested in seeing what a diverse arts-integrated education could do for your child, contact us today. And become part of the AAW team.