Artists are no strangers to standing up on behalf of the political views they espouse.

But when we say an AAW student gets political, we aren’t so much referring to that notion.

While many Arts Academy in the Woods students certainly have and share their political views through their art, what we’re addressing here is more in the vein of political activism.

And the political warrior we’re referring to is AAW student Layla Brewer.

AAW Student Gets Political in Iowa

Do you remember what you were doing one week before the Iowa Caucus? (It’s okay if you don’t.) 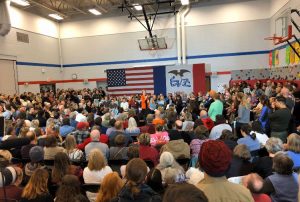 Layla Brewer can tell you exactly what she was doing.

She was flying down to Des Moines, Iowa after winning an essay contest she heard about from AAW teacher Mr. Moss.

Even though she was the only AAW student embarking on this journey, she was joined by other students from different states to attend an event at the caucus called the Mikva Challenge.

What is the Mikva Challenge?

According to Brewer, “the Mikva challenge is an event that happens every four years where students are flown to Iowa in order to learn about the Caucus and to do canvassing and phone banking for one of their top three candidates.”

Mikva Challenge launched its first program over 20 years ago during the 1998-99 school year as a tribute to former White House Counsel, Judge, and U.S. Congressman Abner Mikva and his wife Zoe – who was a teacher and lifelong education activist.

It started as a small pilot program with an all-volunteer staff working tirelessly to operate an electoral engagement project in four schools.

They now have three chapters in California, Illinois, and Washington, DC, with partnership initiatives across the country.

The Mikva Challenge reaches over 50,000 youth every year with high-quality Action Civics curriculum and programming. They encourage each upcoming generation to develop civic knowledge and leadership skills while transforming attitudes about political participation.

It’s a powerful program that has lifelong impacts on students’ professional and personal success.

History of the Mikva Challenge

Judge Ab Mikva had an amazing career working as White House Counsel in the upper echelons of all three branches of government. His wife Zoe was an outspoken education advocate.

A year after Mikva retired, former Mikva staff members got together to brainstorm a way to create a lasting tribute to Mikva and Zoe before it was too late for them to appreciate it.

In 1997, the Mikva Challenge was incorporated. Their goal was to inspire Chicago city youth to participate in democracy by getting them involved in hands-on electoral experiences.

Four teachers in two Chicago public high schools piloted the program and set out to get students studying the issues and candidates in an election. They soon had them volunteering on campaigns.

A fundraiser in 1999 that raised nearly $200 thousand enabled them to plan a trip to the Iowa Caucus for the students. A year later, 100 students representing nine schools campaigned in the Iowa Primary for President.

In 2001, Mikva launched its Summer Government and Leadership Institute. In 2002, the program extended to 30 new high schools. Mikva students even advocated for election reform in the war of the Florida recount.

Two years later in 2004, Mikva students were taking campaign trips to the New Hampshire Primary and Iowa Caucuses during presidential election years. These experiences transformed how the involved students saw their role as citizens and future voters. 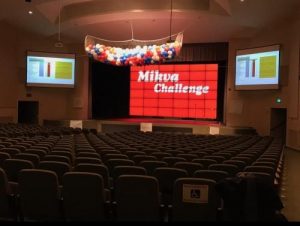 Mikva youth traveled to Iowa, New Hampshire, Colorado, Minnesota, Indiana, and Wisconsin to campaign during the 2008 Presidential Election season. And Mikva youth were even at the Inauguration of President Barack Obama.

Judge Mikva passed away in 2016. But his legacy lives on. Mikva continues to grow its partnerships with schools nationwide – including AAW.

There’s no arguing that the event impacted the way Baker sees politics and the electoral college.

When asked what it was like to be in such a serious political space during this critical time on the campaign trail she said, “It was impactful. Everyone who attended came with an active interest in politics and the 2020 election. But it made you so much more informed, and reinforced that despite age we can impact the election.”

She went on further to explain how she gained a much deeper understanding of how a caucus is run. And it wasn’t quite what she expected.

“It was run a bit messily and I was somewhat disappointed given how much they talk it up prior to the event,” she said. “I assumed and hoped it would be better run. However, it was still wonderful to watch it with a deeper understanding of how it works.”

The Best Part of the Iowa Caucus

Baker was forthcoming when talking about her favorite parts of the caucus. 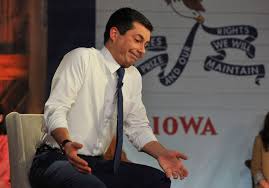 “It was a tie between seeing candidate Pete Buttigieg speak; actually being able to see a potential future president speak live,” she said. “But I also greatly enjoyed being able to meet people and hear everyone’s stories and what inspired their interest in politics.”

Overall, she felt the experience was immensely positive and it changed her outlook on politics forever in a way for which she says she’s grateful. “It was fun, it was educational, and I couldn’t be more pleased with the outcome.”

AAW Student Gets Political Is Just the Beginning

Hearing that an AAW student gets political is just the tip of the iceberg.

Arts Academy in the Woods goes to great lengths to foster the unique interests of every student. They’ve even recently started a basketball team!

So what could AAW offer you? Find out.

Contact us today to request a tour of the school. And come see what you’ve been missing.